Your Perception of Me Is a Reflection of You

The arc of the moral universe is long, but it bends toward justice.

A disturbing event recently took place in a Starbucks, the globally trendy café, in an American city. It’s an event that reveals the abuses that can happen when we aren’t awake to our own biases and prejudices.

An employee of Starbucks called police to report that two men were “refusing to make a purchase or leave” and requested that police come eject them, even though the men had explained they were waiting for a business friend. In police dispatch responses, the event was described as “a disturbance” among a “group of males,” and several officers were sent. The person these men were waiting for arrived just in time to see his friends being handcuffed and led away, without incident. A picture taken in the store shows one man standing silently, looking downward, while being cuffed. The men were later released without comment from the police.

But the story went viral, with good reasons. For one, this happened in Philadelphia, a city whose national moniker is The City of Brotherly Love. The irony is evident. For another, according to its website, the values that the Starbucks corporation and its employees live by are: “Creating a culture of warmth and belonging, where everyone is welcome; Acting with courage, challenging the status quo and finding new ways to grow our company and each other; Being present, connecting with transparency, dignity and respect; and Delivering our very best in all we do, holding ourselves accountable for results.” 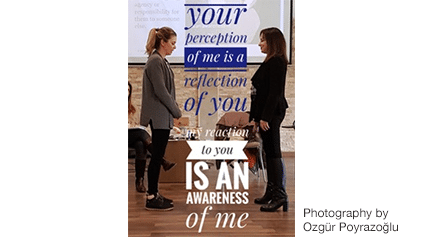 Starbucks was born in the U.S. but has since expanded its reach across the globe, serving an incredibly diverse population of all ethnicities, races, colors, and creeds. So how did Philadelphia police and Starbucks fail their own values at home, in The City of Brotherly Love?

It’s gratifying that Starbucks CEO Kenneth Johnson responded promptly to the incident, apologizing and calling it “reprehensible.” He decided to close down all 8,000 company-owned stores for an afternoon of required “racial-bias” training—a big decision for a multinational company (some estimate the closure will cost the company at least $7 million). According to the Washington Post, “The company is turning to names like Equal Justice Initiative founder Bryan Stevenson and the NAACP Legal Defense and Education Fund president for guidance.” It’s a decision to be acknowledged and supported. Yet despite the apology, the high-profile participants invited, and the corporate cost of a few million dollars (for a multi-billion-dollar company), is it enough?

In the ongoing social evolution we’re experiencing through globally-accessible media interconnections and massive migrations of people, a fundamental recognition and acceptance of diversity has never seemed more urgent. Great leaders inspire connection and purpose between diverse groups in order to make a difference. Great leaders inspire us to see and feel our shared humanity in pursuit of a common goal that serves a greater good—for our team members, for our department, for our corporate mission, for our community, for our world at large. People working together purposefully, across differences and dissimilarities, send a message of a social evolution that bends toward positive energy, equality, and compassion.

Social scientists define bias as “prejudice in favor of or against one thing, person, or group compared with another, usually in a way considered to be unfair.” When two white men are waiting for the last member of their party to arrive at a public eatery, the server (or worse, the institution he works for) with a bias in favor of whites will respond with some patient statement of looking forward to serving everyone when the friend arrives. When two black men are doing the same, the server (or worse, the institution he works for) with a bias against people of color will respond differently, perhaps with covert or overt disrespect, often triggering reactions on both sides that may lead to unnecessary negative consequences. In the Starbucks incident, I’m grateful the situation didn’t lead to physical injury. Mostly this is due to the calm of the two men arrested, who were neither combative nor resistant. They also had numerous onlookers video-recording and verbally condemning the action as it happened. They had the backing of their immediate “community,” if not of the Starbucks store or the police.

We are living in polarized times, where there are many people who have a worldview that embraces differences, but also too many people whose unconscious or disowned biases are threats to the psychological and physical well being of others. Unaware bias and prejudice isn’t just a social barrier that keeps people from achieving their full potential or shuts them out of opportunities that others have. Unaware bias and prejudice can actually be lethal as well. Over the past decade in America, there’s been a notable uptick in police violence directed at men of color, some of whom have been shot dead while unarmed or with their backs turned to police. The Black Lives Matter movement arose from outrage over these deaths. It gains momentum with every black life taken by senseless police actions and so few in law enforcement are held accountable.

I applaud the initiative of Starbucks’s intention to hold racial-bias training for all its employees in May. But I’m not optimistic about the outcome, given its limited time parameters. Until we can take responsibility and accountability for the biases that skew our own perceptions and responses, we’ll be unable to spot the same or opposite biases in others; we won’t be able to bring them into awareness and safely experiment with alternative perspectives and responses. With focus and patience, the world is changed for the better one by one by one. I once coached a brilliant surgeon. He told me that whenever he encountered a patient he found especially irritating or whose presence aroused emotional discomfort, he would, in fact, work even more tirelessly to insure that this patient had the best possible treatment. He had a bias, and he acknowledged it. He was aware that his resistance to this patient made him more vulnerable to mistakes or oversights. So he consciously worked to counter that bias and to ensure that the care he gave was to the best of his ability. Surely this is an approach we can all appreciate and embrace, whether as private individuals or professionals.

Teaching about bias, hidden or otherwise, is central to all diversity programs. It’s an important awareness for helping people work more effectively in an increasingly diverse workforce. Often, though, these programs (like the Starbucks initiative) seem a bit narrow and rushed. Speaking as a Gestalt practitioner and advocate of awareness practices, I know that to succeed—as individuals, or groups, or organizations—takes time, energy, and courage in order to surface, identify, acknowledge, and accept the filters of bias and prejudice through which we all see the world. If we intend to make a difference with our work, coaches are particularly tasked to learn the biases that influence how we show up to and respond to clients who are different from us. I fell in love with this expression that so eloquently captures a profound truth: “Your perception of me is a reflection of you. My reaction to you is an awareness of me.”* Our relationships reveal other people to us, but they also, and perhaps more importantly, reveal us to ourselves. Relationships are mirrors that can reveal simultaneously the biases of others and our own. They give us opportunities to learn, grow, and change.

Each of us needs to become aware of what we evoke in others, and whether our actions provoke the desired outcomes. Are we acting from a positive and compassionate mindset, which serves our interactions with others and furthers their goals? Or are we acting from a negative and closed mindset—rooted in our biases and prejudices—which interferes with or injures our interactions with others, and blocks them from achieving their goals? Are we committed to bringing them to a level of self-awareness that supports their successful navigation of a complex and diverse world? Are we attentive to the nature of our clients’ relationships, and to what those relationships tell us about our clients’ ability to adapt to difference and change? Are we working toward knowing ourselves clearly and intimately enough to serve our clients well, with integrity and understanding and compassion?

The Starbucks incident sparked me to reflect on coaching presence as a profound, intimate, powerful, and evocative expression of genuine relationship. If we come to know what’s holding us back, we can move forward positively and bring others with us. Unaware and unacknowledged biases obstruct our own personal growth and development, in part because they lead us to hold others back from using their skills and talents to influence and better serve their groups, their teams, their organization. Gestalt-based awareness practices often result in our clients’ sense of liberation from irrelevant internalized restrictions on perception, behavior, and thinking. Awareness intelligence (Awareness IQ) helps us, personally and professionally, to serve others through our embedded values, our creativity, our emotional wisdom, our heart-based relations, our clear and persuasive voice, our deep intuition, and our grasp of context and environment.

We can never be free of bias and prejudice. But we can work to hold ourselves accountable for our own biases and prejudices. We can work to consciously treat others with the openness, civility, and humanity all deserve. We can begin by remembering, always, that: “Your perception of me is a reflection of you, and my response to you is an awareness of me.”

*The quote is attributed to “Coach Bobbi” [Bobbi Chegwyn] on Facebook.